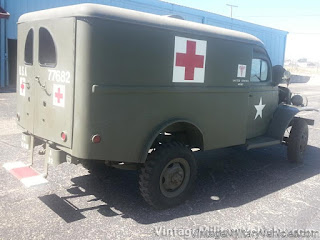 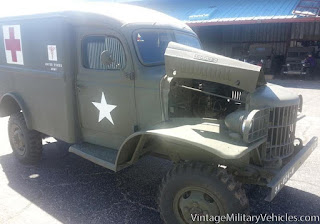 This ambulance is in the West Texas desert and it never had rust on it. Other than a scratch, it has been well cared for and serviced.

Dodge began producing light trucks immediately upon its formation in 1914. For the first few years these were based largely on the existing passenger cars, later specific chassis and body designs were used. Light- and medium-duty models were offered first, then a heavy-duty range was added during the 1930s and 1940s. Dodge produced its first prototypes of dedicated military trucks in late 1939: the 1/2 ton 4×4 VC series. Production of the VC series started in 1940. At the outset of World War II, Dodge produced the G-505 WC ½ ton series of military light trucks in 38 individual models, thousands of some models were produced, while only a few of some others were made. The WC ½ ton trucks replaced the 1940 VC-1 to VC-6 ½ton Dodge trucks which were also part of the G505 series. 79,771 of the ½ ton trucks were produced during late 1940–1942 under War Department contracts. WC models 1 to 50 were part of the 1/2 ton range and were 80% interchangeable in service parts with the later 3/4 ton models.

The Dodge WC series was a range of light military trucks produced by Dodge and Fargo during World War II. The series included weapon carriers, telephone installation trucks, ambulances, reconnaissance vehicles, mobile workshops and command cars. They were replaced after the war by the Dodge M-series vehicles. WC was a Dodge model code: W for 1941 and C for half-ton rating.

Entering production during 1941 to early 1942, they were specifically designed to serve as military ambulances. These early variants are distinguishable from the later ones by having a curved radiator grille, while the later ones (WC51 onwards) featured a flat grille. These versions were given a longer 123 in (3,100 mm) wheelbase.

1942 Ford GPW with new body, tires, seat cushions, rebuilt engine, etc. This is a project that we are finishing and it is almost ready. ... 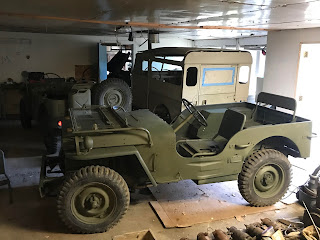